David Halbfinger‘s N.Y. Times piece (2.18.07) about David Fincher‘s Zodiac has some very candid quotes from the three stars — Jake Gyllenhaal, Robert Downey, Jr., Mark Ruffalo — about Fincher’s exacting perfectionism, and particularly how this sometimes led to their having to perform a scene 70 times or more. And it’s hilarious stuff. Really. I would imagine that anyone reading this who hasn’t yet seen Zodiac will now want to see it all the more. 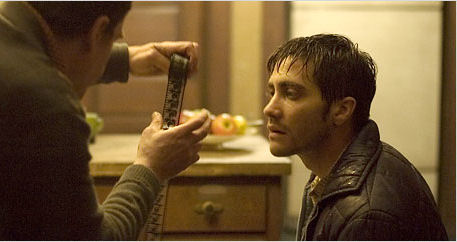 “What’s so wonderful about movies is, you get your shot,” Gyllenhaal says. “They even call it a shot. The stakes are high. You get your chance to prove what you can do. You get a take, 5 takes, 10 takes. Some places, 90 takes. But there is a stopping point. There’s a point at which you go, `That’s what we have to work with.’ But we would reshoot things. So there came a point where I would say, well, what do I do? Where’s the risk?”

“Told of Gyllenhaal’s comments, Fincher half-jokingly said, ‘I hate earnestness in performance,’ adding, ‘Usually by Take 17 the earnestness is gone.’ (Wells aside: To be fair, Gyllenhaal’s acting can seem a little too “sincere” and “heartfelt” at times. Fincher was probably right to try to mess with that.)

“But half-joking aside, [Fincher] said that collaboration ‘has to come from a place of deep knowledge.'” (Wells aside: Hah!) “While he had no objections to having fun, he said, ‘When you go to your job, is it supposed to be fun, or are you supposed to get stuff done?’ (Wells aside: the world is divided into two camps — the much larger camp A is into the ritual of neck massages, alpha vibes and “fun” while working — the much smaller camp B is into getting stuff done in such a way that everyone involved will be immensely proud when they see the movie five years later on DVD, and later with the neck massages.)

“[Fincher] later called back and said he ‘adored the cast” of Zodiac‘ and felt “lucky to have them all,” but was ‘totally shocked‘ by Gyllenhaal’s remark about reshoots.

“Downey, impeccably cast as a crime reporter driven to drink, drugs and dissolution, called Fincher a disciplinarian and agreed that, as is often said, “he’s always the smartest guy in the room.” But Downey put this in perspective.

“Sometimes it’s really hard because it might not feel collaborative, but ultimately filmmaking is a director’s medium,” he said. “I just decided, aside from several times I wanted to garrote him, that I was going to give him what he wanted. I think I’m a perfect person to work for him, because I understand gulags.”

“Ruffalo too survived some 70-take shots. “The way I see it is, you enter into someone else’s world as an actor,” he said. “You can put your expectations aside and have an experience that’s new and pushes and changes you, or hold onto what you think it should be and have a stubborn, immovable journey that’s filled with disappointment and anger.”

“Fincher was equally demanding of everyone — executives, actors, himself — and ‘he knows he’s taking a stab at eternity,’ Ruffalo said. ‘He knows that this will outlive him. And he’s not going to settle for anything other than satisfaction, deep satisfaction. Somewhere along the line he said, ‘I will not settle for less.””