Variety critic Todd McCarthy has suggested that the key target audience for Zack Snyder‘s 300 (Warner Bros., 3.9) may be a bit broader than just your standard comic-book geek-fanboy action crowd. Warner Bros. would do well, he’s essentially saying, to launch a concurrent ad campaign with The Advocate and other gay-friendly publications. 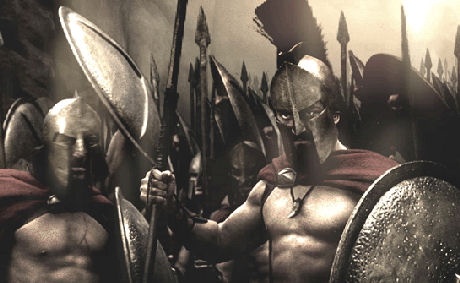 Right after the words “at age 7” I was expecting to read “and soon after had to be separated from older males with a crowbar” but nope.

The question, of course, is who’s the main closet case among the 300 auteurs? Snyder is the easiest guy to point to, but what about Frank Miller? What other films have been marketed as action-genre films aimed at straight males but in fact had a simultaneous homoerotic appeal to gays? Spartacus was the first sword- and-sandal pic to tap into this (47 years ago!) with the “snails and oysters” scene between Laurence Olivier and Tony Curtis.