“Case Closed” author Gerald Posner, who believes Lee Harvey Oswald was the only shooter on 11.22.63, has pointed out in a N.Y. Times story that the just-revealed George Jefferies 8mm home movies of JFK and Jackie Kennedy riding in the Presidential limo on Dallas’ Main Street (i.e., a minute or less before the shots rang out) that JFK’s easily visibly bunched-up suit jacket explains why the back-wound bullet hole didn’t line up with the bullet hole in his shirt. 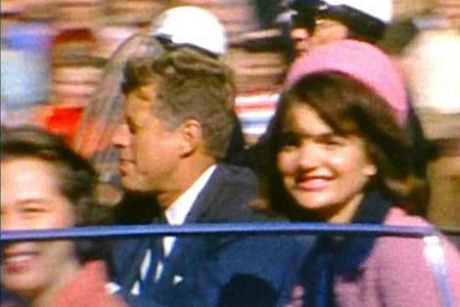 And the bullet that ripped into both Kennedy and Connolly without altering its shape will be forever magic. And it was entirely natural for JFK to slam back into the car seat to his left after being shot in the head from an area above and to his right-rear. And all those confused people who ran up the slope of the grassy knoll in the seconds after the shooting were reacting to an acoustical deception, plain and simple.

Click on the Jefferies video (i.e., right next to the Posner story on the Times web page) and look at the people waiting near a Main Street corner, and notice the 1963 haircuts on the guys. Really short and close-shaven on the sides, loaded down with Brylcream, some scalp showing through. And yet all the haircuts in Oliver Stone‘s JFK were a tiny bit too long and mostly Brylcream-free. Just about any film depicting Average Joe haircuts in the early ’60s almost always get it wrong also. Pre-Beatles (i.e., before January-February 1964) haircuts in this country were very straight-arrow rigid, almost military.