A fully reasoned, highly persuasive New York Post piece by Michael Kane, arguing against the notion of Eddie Murphy as a deserving Best Supporting Actor nominee, appeared this morning. It’s very surprising, I’m thinking, that the most devastating quote against the guy is delivered in the article by Oscarwatch.com‘s Sasha Stone, who’s said I’ve got my head screwed on backwards for trying to articulate the anti-Murphy current. 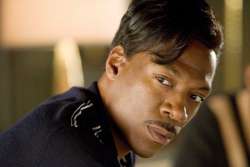 Murphy “has a 90 percent chance of winning right now,” she says. “And I’m getting the sense that he doesn’t even care. He’s been prickly through this whole thing. He doesn’t want to let his guard down. He doesn’t want to look desperate or appear desperate. You can tell he’s up there trying to say the right things, going through the motions, but maybe deep down he thinks it wasn’t really Oscar-worthy.”

“Norbit,'” Stone says, “is really not the best Eddie Murphy to be showing right now. What if you’re an Oscar voter, and you drive by that giant billboard on Ventura Boulevard? Maybe you start thinking, this movie is probably going to make $100 million. Let’s give the award to poor Jackie Earle Haley, who has nothing. Eddie Murphy doesn’t need an Oscar.”

“Let’s face it, he’s really very good in [Dreamgirls], on stage,” another observer says in the piece. “It’s not just that he can sing. He’s got the moves. He knows how to do it.It’s like an extended James Brown impression. Is that great acting? That’s okay acting. He did the job. But there’s no basis for him to be saluted and put up on the mountaintop.

“Eddie Murphy may well have something to show that proves that he’s a good actor, but Dreamgirls‘ and the role of James Thunder’ Early is not that role. It’s basically prancing around on stage.”

The odd thing is, Kane writes, is that “this kind of criticism may not even get an argument from Murphy himself.

“Even he dismisses his supposed ‘Oscar clip’ in Dreamgirls, a scene that comes late in the film, when his character is down on his luck and reaches for heroin to ease the pain. When a friend asks him to stop, ‘Thunder’ Early shoots him a look that without words fully captures the moment of surrender of a proud man.

“But even Murphy, true to form, laughs off the artistry of the acting.

“‘After that scene was shot,’ recalled Murphy after winning the Golden Globe, ‘our producer, Laurence Mark, said, ‘Oh, that look you just gave him was incredible.’ And I was like, ‘What’s he talking about?’ I didn’t know what he meant.

“And then [co-star] Jamie [Foxx] came over a week later and said, I saw that look that you did.’ And then I watched the movie, and I was like, what the f— are they talking about? Everyone was like, Oh, that moment,’ and I was like, I didn’t do nothing.'”