A perfect confirmation about Eddie Murphy having left the Kodak auditorium after he didn’t win the Best Supporting Actor Oscar has arrived by way of L.A. Times columnist Joel Stein, who spent last Sunday night hanging at the Hollywood Bowl parking lot with all the top celebrity limo drivers, one of them being Murphy’s driver, Karlo Ateinza, who’s been hauling Murphy around for the last seven years. 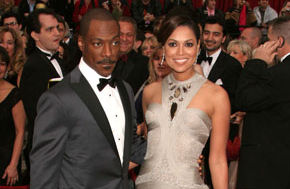 There’s also this report from the Daily Mail‘s Baz Bamigboye: “If there was an award for worst loser, Eddie Murphy would surely have nailed it.

“He was tipped to take the best supporting actor Oscar for his role in Dreamgirls but lost out to 72-year-old Alan Arkin, who played a drug-addicted grandfather in Little Miss Sunshine. Minutes later Murphy stormed out of the venue and went home — breaking an Oscars taboo of being ungracious in defeat.”

Theres also this “Celebrity News” report by Us magazine’s Noelle Hancock: “Is Eddie Murphy a sore loser? After failing to nab the award for Best Supporting Actor to Little Miss Sunshine√É¬¢√¢‚Äö¬¨√¢‚Äû¬¢s Alan Arkin, Murphy tried to brush off the loss, telling Us, ‘It’s fine. It happens. It’s OK.’