“If the online file-sharing universe is the Wild West, Sweden is Deadwood — a place where the rule of law leaves barely a footprint,” writes Steve Daly in a just-out Vanity Fair piece about cybergeek movie piracy called “Pirates of the Multiplex,” and particularly the two guys who run Sweden’s Pirate Bay site, Fredric Neij and Gottfrid Svartholm. 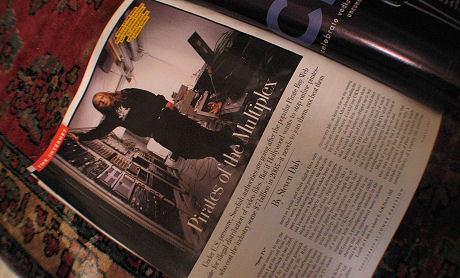 “Thanks to a combination of national copyright laws, laissez-faire social attitudes, and inexpensive and superior bandwidth,” Daly erxplains, “gentle little Sweden — which refers to itself as Europe’s ‘duck pond’ — has become a file-sharing fortress in which more than 10 per cent of its nine million citizens trade digital material, much of it provided by Pirate Bay.”

The seminal pull-quote of the piece reads, “Will Hollywood adapt and survive, or will it continue its battle against a million resourceful computer geeks?”