The esteemed auteurs who produced Anna Nicole Smith‘s last film, an apparent piece of shit called Illegal Aliens, have cancelled screenings because, as director David Giancola has explained to the N.Y. Daily News, “so much of it is riffing on Anna and her riffing on herself, I just don’t think, with her passing, it’s appropriate to screen it so quickly after her death.” 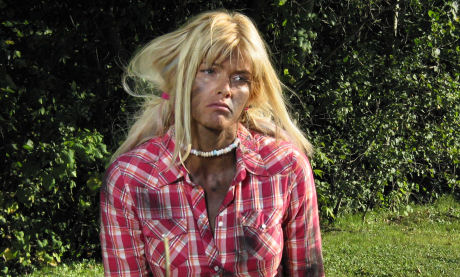 The late Anna Nicole Smith in a still from Illegal Aliens

Smith lived a life that was mainly characterized by tastelessness and lack of refinement, and now that she’s gone her colleagues feel it’s time to get all sensitive and discreet. Not to mention the likelihood that the film’s only chance of being even marginally commercial would depend on it being released as soon as possible and then sent straight to DVD.

“We had planned to release it in April,” Giancola explained. “But right now, it’s such an early stage, we just don’t know.” Filmed in Vermont in 2005, pic is “supposed to be a comedy” and in it, Smith spends a lot of time making fun of herself. Considering how she died, that humor may now be lost. She plays one of three extraterrestrials who fight an intergalactic terrorist. Edgewood Studios bills it as “Charlie’s Angels goes sci-fi.”