Rock is an alien

I haven’t seen Chris Rock‘s I Think I Love My Wife (Fox Searchlight, 3.16), but there’s a fundamental problem with the basic premise. Rock, who directed, co-wrote and stars, plays a bespectacled, suit-wearing husband (Gina Torres is the wife) who develops an extra- marital itch for a hot lady (Kerry Washington). The problem is that I don’t believe Rock could get worked up about anything other than some matter that immediately affects the business fortunes of Chris Rock. 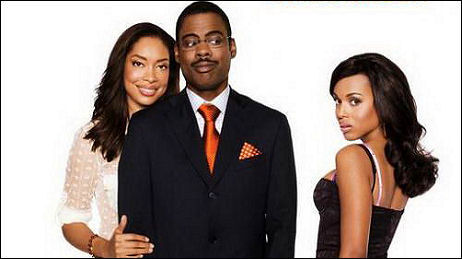 I don’t believe that Rock (or any permutation of him) could ever really be in any kind of recognizable marriage — to me, he always seemed totally married to his act. I’m not even sure I can believe Rock as a guy who has sex. With anyone. It’s even a struggle to imagine him jerking off. Rock is about being on-stage and kicking ass — energy, nerve, focus…how to deliver a joke in exactly the right way. This combined with his obvious intelligence is why he’s so good.

I believe Rock as a guy bristling at the conventions of marriage, which is partly what his character seems to be about. But I don’t believe him as an regular shmoe capable of being committed to a wife , and definitely not a guy who would care enough about sex (extra-marital or otherwise) to go after it with any effort. I don’t know Rock at all — I’ve had exactly one 12-second discussion with him at a party. But I honestly feel that HAL 9000 in 2001: A Space Odyssey projects more humanity.