The Bucket List‘s IMDB synopsis says it’s about two terminally ill older guys — Jack Nicholson, Morgan Freeman — who “escape from a cancer ward and head off on a road trip with a wish list of to-dos before they die.” I’m not going to make any negative assumptions because Rob Reiner is directing. Just because North, Ghosts of Mississippi, The Story of Us, Alex & Emma and Rumor Has it bit the dust is no reason to think rashly. 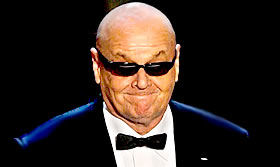 The problem, for me, is this: Nicholson looks too well-fed to play a dying cancer patient. I’ve looked at a lot of online photos of people with chemo baldness and they’re not all emaciated or even thin, so I can’t say Nicholson’s appearance is necessarily inaccurate. But I’ve seen or run into several late-stage cancer patients with concentration-camp bodies in my time. Plus Nicholson has always radiated a certain boisterous life force, and it seems you’d have to do more than shave his head to make look like a man withered by cancer and facing death.

If he had dropped 30 or 40 pounds for the role a la Christian Bale, then I’d be on board. But Jack can’t do that. Jack has his pleasures, his lifestyle…Jack has to be Jack. So a grinning, hale and hearty, roly-poly dying cancer patient will have to do.

The Bucket List (Warner Bros.) is due to come out in November, but the IMDB says it’ll open in Argentina on 9.20.07.