A smart salute for Mark Ruffalo, an actor with a solid-gold attitude who shudders at the idea of ever going “waah, waah, waah” over anything. CHUD’s Devin Faraci asked him about the tension that reportedly kicked in when fellow Zodiac costar Jake Gyllenhaalwas asked by director David Fincher to do dozens of takes for certain scenes. Here’s an excerpt: 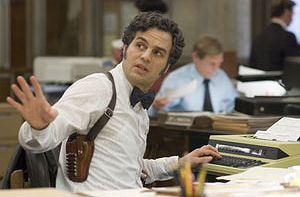 Faraci: “Some of your strongest scenes in the movie are with Jake Gyllenhaal. What’s he like to work with?”

Ruffalo: “He was good. I’ve known Jake for a long time, and it was good to work with him. It was fun to see him really kind of stretch his wings with somebody like Dave Fincher. They were tough scenes, and they took a lot of building, but I’m happy the way they ended up. It’s a good performance, and I think it’s one of his best. As much as he talks about being put through the wringers, it paid off for him.

Faraci: “Was that your experience with Fincher as well? Jake talked to the New York Times about how difficult the process was for him, and Fincher is known for being very exacting. Was your experience similar to his?”

“I mean, to me, we get paid a lot of money and there are people who work a lot frickin’ harder…most everyone on the set. If you had to do a few extra takes…to hear that makes me cringe. Please, God…don’t think we’re all like this.”