“In Hollywood and on Wall Street, some question the focus at New Line Cinema,” writes N.Y. Times reporter Sharon Waxman. She then discusses the why and wherefores of that focus, or lack of. And yet the bedrock “thing” about Shaye and (talk to anyone who’s made a movie for him or had his/her film distributed by New Line) the moody, somewhat erratic, dark-cloud manner in which New Line operates, is not really given a name in the piece. 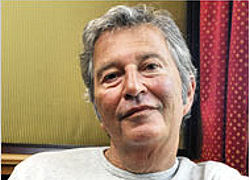 Talk to anyone who’s run a few laps around the track at 116 No. Robertson and they’ll give it a name, all right…but it’s a different proposition to tap it out on a keyboard and put it into print.

“After the success of Lord of the Rings, some had expected the studio to pursue a more ambitious agenda than the urban comedies and horror films of its past,” Waxman writes. “That might have included pressing ahead with The Hobbit, from the [original] ‘Rings’ author J. R. R. Tolkien, to which New Line shares the rights.

“Instead, Shaye has been trading insults with the Rings director Peter Jackson, while the studio has struggled to find a new breakout hit.

“I wouldn’t characterize it as a financial crisis, even if they had a bad year,” said Harold L. Vogel, an entertainment analyst. “It’s more like an identity crisis. It’s a fair question: where do you go from here? Everyone has the same problem, whether you’re 90 or you’re 20. And they’re facing it now with a little more emphasis.”

“If critics have observed that the studio seems distracted, there may be good reason. Shaye’s illness, the seriousness of which was not disclosed to the public before now, apparently derailed the studio for a portion of 2005 and affected the slate in 2006. And last year he took time to direct his own movie, The Last Mimzy, a family-oriented science fiction adventure (co-written by New Line’s president of production, Toby Emmerich) that will open in theaters next month.”

I saw The Last Mimzy a few weeks ago at Sundance, and it’s a nice family-level alien-visitation film…but it’s too E.T.-ish for anyone with strong memories of that 1982 Steven Spielberg film (and who doesn’t recall that film with unusual clarity?) to truly relax with and be genuinely moved by. Of all the stories that could be made into movies, why Shaye chose this particular one is a head-scratcher.