“Sarah Silverman has proved that she is in a league of her own by generating two longish New Yorker pieces within a 16 month span– a detail-rich 5,066 word profile by Dana Goodyear (pegged to the release of Jesus is Magic) that ran in the October, 24, 2005 issue, and this week’s 1,408-word review of her new show by Tad Friend (he neither loved nor hated it). 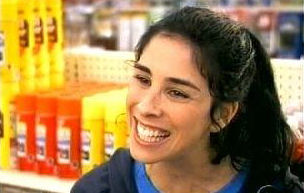 “This is a feat that’s rarely been achieved by the highest lords of literature, let alone a stand up comic who jokes about, well, bowel movements and her vagina. The steadfast, rock-solid New Yorker is notoriously parsimonious about covering the same cultural occurrences more than once (for good reason: they’re The New Yorker, after all), which makes Silverman’s coup all the more spectacular. Nearly 6,500 words of coverage from the the New Yorker? The closest most of us get to this is having two words (our name) on the subscription label.” — from Peter Hyman‘s Huffington Post piece.