Two and a half years ago New Line marketing chief Russell Schwartz made a decision not to release Mike Binder‘s The Upside of Anger — an emotionally affecting adult relationship drama with two exceptional performances from costars Joan Allen and Kevin Costner — during 2004’s Oscar season (i.e., October- November), bumping it instead into a March ’05 release. Anger was well received, but there’s no question it suffered in esteem (and possibly at the box-office) because it wasn’t in the ’04 “derby.” 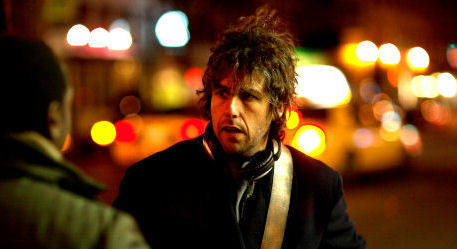 Now the same thing is happening and then some with Binder’s Reign Over Me, an exceptionally strong adult relationship drama with a surprisingly affecting lead performance by Adam Sandler and a very respectable one by Don Cheadle. Sony marketing execs Jeff Blake and Valerie Van Galder aren’t exactly “doing a Russell Schwartz” — they’ve got their own style. But it boils down to not showing the love, not really, and Blake/Van Galder being either unwilling or unable to sell Reign Over Me with the heart and TLC that it needs.

Reign, which I saw in a nearly completed form late last summer, could have been released during the ’06 derby season but Blake/Van Galder didn’t want Sandler’s performance competing for honors with Will Smith‘s in The Pursuit of Happyness (especially with Sandler and Smith being mainly known for their comic skills), so they bumped it into a 3.9.07 release. And then they bumped it again to 3.23.07.

I’ve been getting indications all along that Sony is a wee bit fearful of press reactions (a lot of critics are down on Sandler no matter what he does, and some have recoiled at Reign‘s anecdotal use of the 9/11 tragedy as a backstory element) and aren’t 100% behind it. I’m not at liberty to divulge one apparent indicator, but I can report that Sony turned down an opening-night slot at the Santa Barbara Film Festival, which could have started the ball rolling with Sandler showing up and chatting on the red carpet, etc.

It just seems to me that Binder’s film is going to get faintly pissed on in the way all smallish adult relationship movies get faintly pissed on these days by big-studio marketing departments. Reign needs a Fox Searchlight or a Picturehouse-style marketing effort, which Sony./Columbia is renowned for not understanding or being the least bit good at. 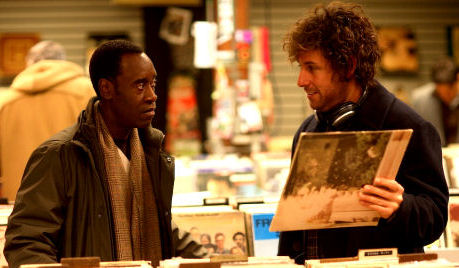 I am not alone in this view. Sony’s Reign Over Me attitude seems to basically be about hesitancy. There seems to be an underlying attitude of, “Let’s get Sandler to go on Kimmel, SNL, Letterman and O’Brien…and if it dies or trails off after a week or two, we did our best!”

The reasons for this attitude have nothing to do with research screening scores. Not according to what I’ve heard, at least. Average Joes allegedly love Reign Over Me. And there’s no tracking to go by yet. Sony’s half-heartedness is probably tied on some level to Sandler’s yes-maybe passive-aggressive mindset, by which I mean he’s been saying he loves the film and wants to support it but is not really using his clout to make this or that opportunity happen.

Sandler is holding to his usual policy of not doing print interviews, despite his performance (which I think is brilliant) being a kind of career breakthrough for him. He’s playing a guy who’s dealing with extraordinary grief (i.e., the film is actually about a dentist who refuses to deal with his having lost his wife and two daughters in a plane crash), and it’s fascinating the way Sandler uses anger and rage and adolescent withdrawal to pull the character together while looking like Bob Dylan’s twin brother on the Blonde on Blonde cover.

And yet Sandler doesn’t seem to be standing up and saying “let’s really go to the mat with this one.” Like Blake/Van Galder, he seems to be taking a wait-and-see approach.

The underlying feeling seems to be, “We’re hoping for the best, naturally, but it would be simpler and less hard for all of us if we just opened this film in the usual blah-blah way and let whatever’s going to happen, happen. Obviously we don’t want Reign to die — we love Adam, we love Mike — but we don’t really believe in it, not really, and we don’t want to do anything exceptional because we’re not seeing any kind of big buck reception.” 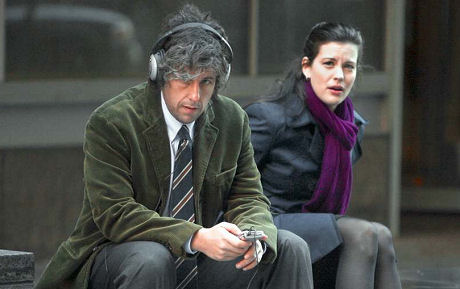 In short, they’re taking the usual big-studio attitude about smallish, sensitive films which is to go through the motions without really feeling the spirit and acting upon it. They obviously get Ghost Rider because the fans get Ghost Rider — a $35 million dollar opening later this month!. — but they’re acting as if they feel stuck with Reign Over Me. No one thing you can put your finger on, but the attitude is there.

I tried to engage Sony marketing execs in a conversation about the Reign campaign, and all I got back was an e-mail saying I would be invited to see a slightly re-edited version during the next round of screenings. I talked to Binder about what I was feeling and he’s not as worked up. His attitude is that he’s very happy with the film, that he’s proud of it (particularly with Sandler and Cheadle’s performances), and that whatever’s going to happen when it opens is in the cards either way, and that he’s got other movies to write and shoot.

Sony is planning Reign Over Me screenings sometime this month. All distributors think of their films as little children, but all children have to make their own way in the world,. If Reign Over Me gets traction on it own when it opens, Sony will of course smile and pop open the champagne…but if it doesn’t find its own traction, c’est la vie.