When it’s all said and done on Sunday evening, Zack Snyder‘s 300 (renamed in a roundabout way by L.A. City Beat critic Andy Klein as Go Tell The Spartans to Go Fuck Themselves) will end up with $30 million give or take. That’s a more-than-50% plunge from last weekend, but it’ll still be at $110 million or thereabouts by tomorrow night. God help us…God help us all. 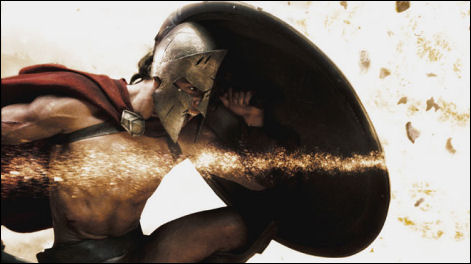 Some commentators have been clucking, “My, look at the stunning disparity between what the critics and the ticket-buying public love and hate…critics sure are out of step with Joe Gorilla.” That’s certainly true on this end — I am way out of step with fans of 300, and I’m absolutely beaming with pride as a result. This is a stale and tired-ass thing to say, I realize, but every firing synapse tells me that 300 is yet another metaphor for the end of moviegoing civilization as some of us have known it for the last, oh, 30-plus years.

Snyder, in my book, now ranks at the top of the list of villain-class Hollywood directors like Michael Bay, Stephen Sommers, Shawn Levy and Roger Kumble. There’s never been a dumber, emptier and more sub-simian influence upon narrative cinema than the graphic novel, and 300 is the clank of a sword striking a metal shield and the dumb-thunk sound of tens of millions of graphic-novel-worshipping moviegoers going, “Whoa…looks cool.”

I paid to see 300 last week (I paid money to see it!) and liked exactly two things — Lena Headey‘s skimpy dress (and of course her big shtup scene) and the scene when the crouching Spartans are chuckling with each other about how the dense shower of 10,000 Persian flying arrows are causing them to fight in the shade. That was good — the film was on to something during that very brief moment.

It’ll be nip and tuck as to whether Premonition, the poorly-reviewed Sandra Bullock thriller, takes the second place prize with an estimated $18 million, or whether Wild Hogs takes in a bit more than $18 million and edges out Bullock. Hogs, in any event, will hit $100 million sometime today or tomorrow. Dead Silence will come in fourth with $7 mil or so. Chris Rock‘s I Think I Love My Wife is sputtering and may finish with just over $5 million tops….not good.