The bottom line with the Joe Roth-recutting-Julie Taymor‘s-Across The Universe story (as written by N.Y. Times reporter Sharon Waxman) is one thing and one thing only — the trailer. 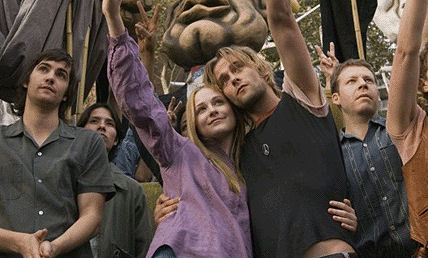 We all know that trailers never tell the truth about a movie, but it’s hard to watch this one and not be at least a little bit impressed. It’s a kids-tripping-out-in-the-late-’60s thing with the cast singing and dancing to Beatles songs, and it kind of looks to me like Milos Forman‘s Hair. The trailer has an aura of vision and intelligence — a carefully measured, ultra-colorful, extra-vivid quality is there from start to finish.

The gist of Waxman’s story is that Taymor’s cut of Across the Universe, which cost $45 million to make, ran two hours and eight minutes. But like many strong directors, Taymor (Frida, Titus) has a tendency towards willfulness and obstinacy, and she freaked when Roth created his own version — “about a half-hour shorter” — without her agreement.

“Roth’s moves have left Taymor feeling helpless and considering taking her name off the movie,” wriites Waxman. “Disavowing a film is the most radical step available to a director like Taymor, who does not have final cut, one that could embarrass the studio and hurt the movie’s chances for a successful release in September.”

There must have been something askew and/or unsatisfying with Taymor’s film for Roth to have stepped in like that. Research audiences must have said some pissy things about it. A guy on the IMDB who may or may not have seen it says “it would be cruel to call Across the Universe a two-hour music video because it tries so hard to be more than that, but it wouldn’t be entirely inaccurate either. The movie can be summed up as a series of punctuated scenes and characters each represented by a Beatles song and strung together by a boilerplate love story.”

I say again — look at the trailer.

The costars and cameo-ists are Jim Sturges, Evan Rachel Wood, Joe Anderson, Dana Fuchs, Salma Hayek, Eddie Izzard and Bono. I don’t know who plays what. The release date is 9.28.07. A celebration or a roasting at the Toronto Film Festival could be in the cards.