“After reading the postings to your blog, I think the folks who have already seen this film are (a) way too young to know anything about the Vietnam War, or (b) utterly insensitive to the film’s racism and reactionary politics. I saw the picture months ago. It’s extremely well-made, but I was also appalled that it glorifies a guy who was on a secret, illegal bombing mission inside Laos when he was shot down. In addition, the movie’s view of the locals is almost unreservedly racist, in that almost everyone is portrayed as sadistic, venal, corrupt…you name it. 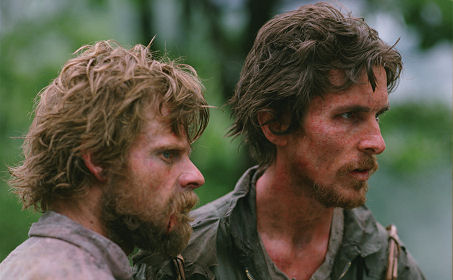 “There’s very little acknowledgement that the guards might be acting so brutally because guys like Dieter the pilot (Christain Bale) have been napalming their villages and destroying their crops. About the only time this comes up, in fact, is when Our Boys have to move up their escape plans because the guards, driven desperate by hunger, plan to kill the prisoners and go back to their villages, where they will hopefully find food. But this situation, essentially caused by the American bombing, is only viewed through the lens of the prisoners’ escape attempt.

“Interestingly, the film opens with footage of a bomber napalming Laos from low level, but never really follows up on this. It’s all well and good to make a movie about one man’s will to survive (and Bale is really terrific in the film), but leaving out the context means Herzog’s film is practically an apologia for American war crimes during the Vietnam era.” — hotshot Manhattan entertainment journalist Lewis Beale

Wells to Beale: I’ll forward this to Werner Herzog — maybe he’ll answer you. O rmaybe I’ll just ask him when he shows up to talk about his work between screenings at Santa Monica’s Aero Theatre.