I had a Collateral moment about ten days ago that I forgot to mention. It’s significant because (a) it’s straight out of a key scene in Michael Mann‘s film and (b) it’s never once happened in the 24 years I’ve lived in this town. I’m talking about a face-to-face with an unperturbed, zen-like coyote. Every animal I’ve ever been close to outside of a zoo has exuded some degree of caution or fear, but not this guy. He was in some kind of zone and couldn’t have cared less. 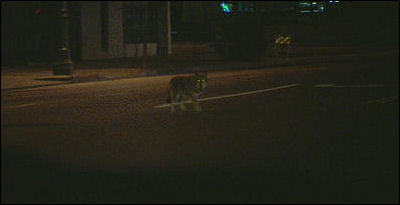 It was around 10 pm. I’d just turned right onto a dark side street off La Brea south, somewhere between 3rd and Sixth Street, and there he was in the middle of the street. He seemed utterly indifferent to my slowing down and lowering the window and snapping a photo. He stood there for 10 or 12 seconds, and then sauntered over to La Brea. For a second I worried about him getting hit by a car.” Then I thought, not this guy…coyotes know how to survive this town better than me. He crossed La Brea like a champ and disappeared into an alley.