The same”Page Six” item also mentions that between the two Grindhouse movies (which are either called Death Planet and Terror Proof or Death Proof and Terror Planet or Planet Proof…same difference) — will be broken up by an intermission composed of a series of fake trailers “for such fictitious titles as Werewolf Women of the SS, directed by Rob Zombie. and another, directed by Hostel‘s Eli Roth, called Thanksgiving, “in which a town’s celebration of Turkey Day is interrupted by a mad slasher.” 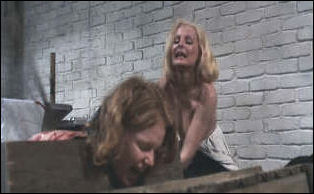 Dyanne Thorne in Ilsa, She-Wolf of the S.S.

Quentin Tarantino’s Grindhouse-themed programming schedule of ’70s and ’80s exploitation films at L.A.’s New Beverly Cinema omits one of the ugliest and most repellent s & m sleaze movies of all time — Ilsa, She-Wolf of the S.S..

Why did Tarantino omit this one? It stinks, it’s diseased, it was produced and performed by untalented people and it makes you feel skanky…why not?

Dyanne Thorne‘s Ilsa — a big-breasted blonde Nazi with a voracious sexual appetite straight out of David F. Freidman‘s libido — died at the end of this wretched film, but this didn’t stop Thorne and the producers from making three more Ilsa films — (1) Ilsa, Harem Keeper of the Oil Sheiks, (2) Ilsa, The Wicked Warden and Ilsa, Tigress of Siberia. Anchor Bay has issued a reasonably good quality DVD box set featuring the first three — Siberia not included.

Ilsa came out of a ’70s sub-genre of grindhouse cinema that blended Nazis, riding crops and perverse sex, otherwise known as Naziploitation. (I remember the term “homosexual Nazi chic” included in a piece by critic Andrew Sarris in the late ’70s.). The genre began with two exercises in upscale perversity– Luchino Visconti‘s The Damned and Liliana Cavani‘s The Night Porter. But before you knew it the gates were down and the inmates were running the asylum with films like Salon Kitty (directed by Tinto Brass) plus Love Camp 7, Gestapo’s Last Orgy and Beast in Heat plus “Ilsa-clone” films like Elsa, Fraulien of the SS and Desert Foxes. 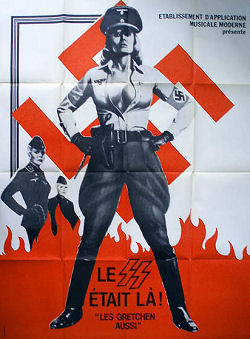