I was okay with Lasse Hallstrom‘s The Hoax (Miramax, 4.6), but — this column is often about the “but” factor — I can’t get over Hallstrom’s decision to let an early panoramic shot of New York City’s lower half (i.e., shot from the roof of a midtown skyscraper in the mid 40s, facing south) that momentarily destroys the audience’s suspension of disbelief. Those of you who know that The Hoax is a period film (it happens entirely in 1971 and early ’72) are probably guessing what the issue is already. 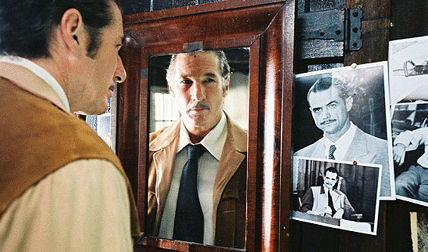 The film begins with a wind-blown Clifford Irving (Richard Gere) and his editor (Hope Davis) standing next to a helipad atop the McGraw-Hill building and awaiting the arrival of a chopper carrying the legendary Howard Hughes, whom Irving has allegedly been interviewing for an exclusive tell-all book. So when the camera takes a look at the lower-Manhattan sprawl, the viewer naturally expects to see the World Trade Center towers, which had been built only two or three years earlier.

But The Hoax was shot in 2005 by guys on a budget, and so they’re not there. As lame as that sounds, that’s what happened. Worse, the same tower-less shot is used in The Hoax again, around the two-thirds mark. Almost as if someone is saying to us, “Were you out getting popcorn when that early missing-towers shot appeared? You were? Well, here it is again. See what screw-ups we are?”

I tried reaching Hoax producer Mark Gordon to ask (a) why Hallstrom or someone else hadn’t pointed out the error and hired a visual-effects house to paste the towers into the Battery skyline, or (b) why Hallstrom didn’t simply aim his cameras west or east or north. But it took the better part of a day just to get Gordon’s publicist’s number — the subliminal message seemed to be “please leave us alone.” So I called Mark Dornfeld at Custom Film Effects, the company that delivered most of the Hoax‘s CG visuals. 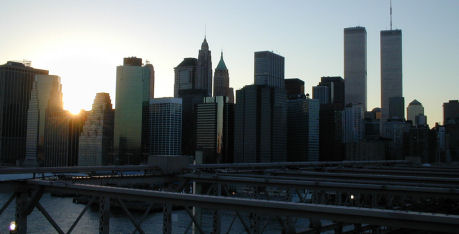 Dornfeld, amiable and easy-going, said “there was no discussion” about pasting in the towers — “it never came up” — but suggested that people should cut Hallstrom a break because “he’s not a native.” How much would it have cost if Hallstrom or Gordon had wanted Dornfeld to paste in the towers? “Ohh, I’d say maybe, let’s say, $3500 to $4000. We’re talking about pasting in a still image into a static shot, and it doesn’t have to be too distinct because there’s a lot of haze in the distance of lower Manhattan anyway, so….yeah, $3500 to $4000.”

I don’t know what else to say, guys. I didn’t go into The Hoax with an attitude, waiting to slam any errors I could find. It’s not a bad film at all, but if you show any audience from any country in the world a visual of lower Manhattan they’re going to look for one thing and one thing only — the twin towers if the film is set before 9.11.01, or the absence of the tower if it’s set after. Very simple, slam dunk, no discussion.