L.A. Times film critic Kenneth Turan has written an agreeable travel piece about a recent pilgrimage he made to Monument Valley, largely in tribute to his memories of seven John Ford films that were shot there — Stagecoach, My Darling Clementine, Fort Apache She Wore a Yellow Ribbon, The Searchers, Sergeant Rutledge and Cheyenne Autumn. 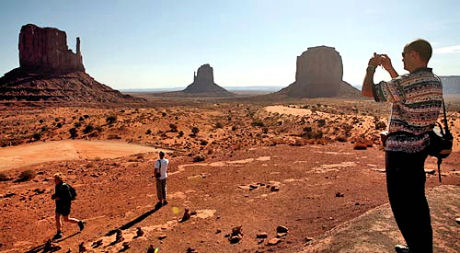 And of course, Turan follows the herd by describing or discussing Monument Valley only in terms of the staggering beauty of the place and not once about the whopping absurdity of any 19th Century settlers living in Monument Valley because it has (a) no grass for cattle to graze on, (b) no rich soil to grow crops with (it’s all sandy, desert-type moon dust with rugged cactus and sage brush-type plants), (c) no big river running through it, and (d) no forest to invade and cut down trees to build log cabins and make lumber with with…no nothin’ in the way of life-sustaining, community-building elements of any kind.

Or at least, none that I’ve been able to notice in watching all these Ford films. Not a damn thing except worthless scenic beauty. And none of the Ford worshippers have ever complained about this…not once. Or have I missed something?