Carl Colpaert‘s G.I. Jesus, which I saw and mostly raved about last summer during my visit to Cinevegas, is playing (barely) in Los Angeles right now, and it will open in New York City on 4.6. When a film doesn’t open with the usual promotional ad push there’s a tendency to assume it’s got problems and isn’t worth catching. Well, it’s not a note-perfect film (I had some issues with two or three aspects) but G.I. Jesus is absolutely worth seeing. 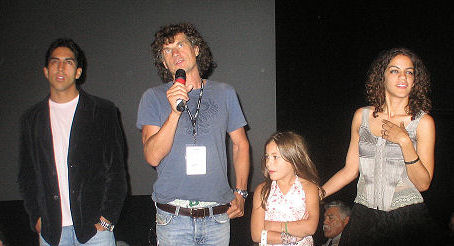 I called it “a partly real, partly hallucinatory homecoming story” told from the perspective of an obviously intelligent young Mexican-American Marine Corporal named Jesus Feliciano (Joe Arquette) who’s haunted by his actions during his time in Iraq. The film is basically about ghosts from that conflict hovering around Jesus, and a growing feeling of betrayal and apartness between himself and his “Dominican princess” wife Claudia (Patricia Mota), whose materialistic ambitions seem, from his perspective, to be creating a gulf between them.

I called G.I. Jesus “is the first truly exceptional Cinevegas film I’ve seen so far” and that “compared to the pickings [at the festival] so far, this psychological domestic drama almost feels miraculous.” But I’d like to be politely clear on my “unquestioned triumph” quote in those ads that just went up today.

What I said, to put a point on it, is that the film “is an unquestioned triumph in the matter of Arquette and Mota’s performances. I believed every word and gesture from these two; everything they say and feel seems genuine.”

March 25, 2007by Jeffrey Wells10 Comments
« Previous post
The Matter of Joseph Gordon-Levitt
Next post »
Reporter on its knees