Another great ’70s crime movie is coming on Warner Home Video DVD, and on the very same day (May 22nd) as the release of WHV’s Prince of the City two-disc set — Ulu Grosbard‘s Straight Time (1978), in which Dustin Hoffman gives one of his most bitingly real performances. 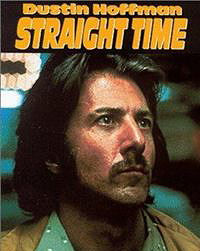 He plays a hard-core felon, Max Dembo, just released from a six-year stretch in the slam, whose difficulties with a goading, mind-fucking parole officer (M. Emmet Walsh) and his fraternizing with two ex-con pals (Harry M. Stanton, Gary Busey) eventually nudge him back to a life of crime. Theresa Russell is first-rate as the average, solemn-faced girl whom Dembo hooks up with.

The taut, hard-edged screenplay was by Jeffrey Boam, Alvin Sargent and Eddie Bunker, based on Bunker’s novel No Beast So Fierce. I’m reading that Michael Mann also contributed to the screenplay but was uncredited upon the film’s release. No Beast So Fierce allegedly served as a source of reference for Robert De Niro‘s Neil McCauley character in Mann’s Heat.