Scott Frank‘s The Lookout (Miramax, 3.30) has some good things going for it. Jeff Daniels‘ performance, for one. The dialogue, the craft and the care that went into it, and the snow and the slush covering the dreary Midwestern locales. But it’s largely about a young brain-damaged guy (Joseph Gordon-Levitt) dealing with hunger and temptation, and I think life is brutal and exhausting enough without having a brain injury to contend with, and I just decided early on I didn’t want to go there. Sorry, but I spook easily. 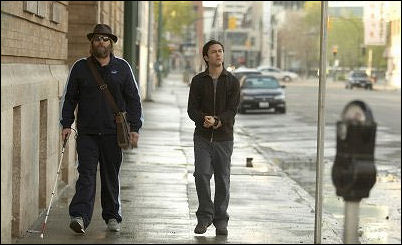 A lot of care and craft and particularity went into The Lookout. It’s nicely sculpted (for what it is), feels well-drawn, has several solid performances (Bruce McGill‘s excellent paterfamillias is another standout) and so on. It was obviously made by a high-end pro who knows how to write snappy, down-to-it dialogue, but the only actor I wanted to hang with was Daniels. He plays a very smart low-rent character with spot-on seasoning and a perfect sense of emphasis. The kind of dumb-ass who knows more than he lets on.

The Lookout is primarily about some low-rent losers embarked on a nefarious scheme to score big dough — a bank job that you know is going to fail because they’re not smart or lucky enough. It’s obviously Fargo-esque in its frequent use of bleak, snowy backdrops as well as the lower-middle-class, criminal-class, upper-class mixture.

Scott wrote the Lookout script well over ten years ago. Sam Mendes was going to direct it (signed on before American Beauty was released), then David Fincher. Michael Mann flirted with it briefly before Frank decided he didn’t want to rewrite it again for another director.

“It was always a small mood piece in my mind, based on someone I knew,” Frank said a couple of weeks ago. I didn’t know how to write about him until I read this piece about these shitty little banks in these tiny towns that sometimes have millions of dollars in the vault for a couple of weeks twice a year, during harvesting and pre-planting seasons.

“I went to these towns in Kansas and you see how empty they are at night. How easy it would be to simply blow up the bank and walk in and walk out with the money! Suddenly, I had this notion of locating this character I had been thinking about in the middle of a thriller and it just went from there.”

I was bothered, frankly, by the bank set-up — all that glass, all those lights, all that exposure. Anyone could have seen those guys doing what they were doing. When a bank job is happening I want the thieves to do the job right and get away, and my thought from the beginning was that the whole place is way too visible and overlit.

Frank had to know that people would compare it to Fargo. If I’d been in Frank’s shoes, knowing full well that I was playing on the same football field as Fargo, I would have gone all the way and written it for dark sardonic laughs all around, like the Coens did. Why not? People are going to Fargo you anyway. When I mentioned this to Frank, he said that a Fargo-like tone “just wasn’t in my head. I wanted something emotional. Maybe I didn’t succeed, but I really wanted a thriller that had some modicum of emotion to it.”

I was impressed by Matthew Goode‘s attempt to get away from the cute and dapper English gentleman stuff that he did in Match Point by playing a low-rent psychopathic thug. But deep down I’m sensing that he really is that guy in Match Point (or a close relation) and that he may as well accept it.