The Matter of Joseph Gordon-Levitt

There’s a profile of Joseph Gordon Levitt, the star of Scott Frank‘s reasonably engrossingThe Lookout (Miramax, 3.30) in today’s N.Y. Times. In it, Franz Lidz declares that Gordon-Levitt’s performance of Chris Pratt, a brain-damaged janitor, is what “really moves this bank heist thriller along.” 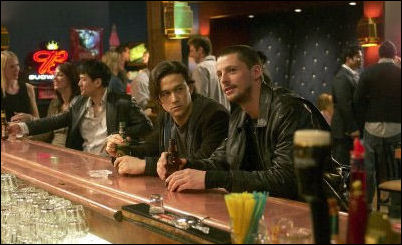 “Chris is a promising high school hockey player whose daredevilry causes a fatal car crash, killing his friends and leaving him with little in the way of short-term memory,” Lidz writes. “Gordon-Levitt fashions him into a still but soulful character, lost yet somehow self-possessed.”

I saw The Lookout three or four weeks ago, and I ‘m sorry to lob a paint balloon at a film that needs all the help it can get, but I found Gordon-Levitt’s character frustrating as hell to spend time with. To me, he seemed lacking in self-possession and way too still for my viewing comfort. In the Times piece Frank calls Gordon-Levitt “one of the two or three greatest actors in his age group,” and costar Jeff Daniels says “there’s a mystery and a privacy to what goes on in Joe’s head…we can see him work through his thoughts. We can almost hear him.”

I really don’t get this. I think Gordon-Levitt is woefully inexpressive. To me, he lives in a little mood house, a house defined by that half-sensitive, half-hurting but mostly deadpan “look” with the frown and the very slightly Eurasian (i.e., island-Hawaiian?) dead-brown eyes. He walked through Brick with that look. He walked through Shadowboxer with that look. And he walks through The Lookout with that look. One way to be a captivating actor, I realize, is to do very little and do it extremely well. Gordon-Levitt has proven, I think that this approach doesn’t necessarily work.

And I hated the driving scene in the beginning. I can’t stand actors who drive and spend a good 50% of the time looking at the person they’re talking to in the passenger seat. You really do have to watch the road when you’re driving — you can kill someone if you don’t. Anyone who ignores that simple reality forfeits all respect and affection from this corner. Gordon-Levitt is worse — he spends 55 to 60% of that driving scene staring at the pretty blonde riding shotgun plus another 20% looking at the sky and the fireflies — the guy literally looks at the road for 20% of the time. It’s infuriating.

And on top of this he turns the lights off. Death wish! Moron! I didn’t just write his character off because of this — I wrote Gordon-:Levitt off, and as fast as I’m concerned he’s not getting back in for a long time. Unless, that is, he delivers an extraordinary rock-out performance down the road, in which case all is forgiven.