That Warner Bros.-funded movie about the political firestorm that happened when Bush White House higher-ups decided in ’03 to get Ambassador Joseph Wilson by outing his wife Valerie Plame as a CIA agent….this could be a seriously gripping All The President’s Men-type thriller. If the screenwriters — Jez and John Butterworth — and the producers — Akiva Goldsman, Jerry and Janet Zucker — decide to portray what really happened and not pussyfoot around. 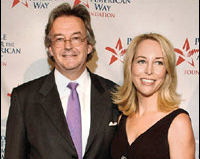 That means they need to go with good colorful villainy (they obviously have to work Karl Rove in as the opportunistic maestro) and they need a solid hero figure to oppose the Bush baddies. I see Tom Hanks as Wilson, Robin Wright Penn as Plame and Ned Beatty as Cheney. Any suggestions for Scooter, Rove, Bush, etc.?

Variety‘s Michael Fleming is reporting that WB “has secured the life rights of Plame and Wilson. Studio also will use Plame’s memoir, Fair Game, if the CIA permits her to publish it. Plame made a reported publishing deal in the $2.5 million range last year, and Simon & Schuster is expected to publish late this year.

“While it would be ironic for Plame’s story to be illegally leaked by the White House, only to have another government branch deny her the right to tell it herself, the CIA has the latitude to silence Plame.

“She left the agency in late 2005 and she and Wilson have filed a civil lawsuit against Vice President Dick Cheney, Karl Rove and Lewis “Scooter” Libby, the former chief of staff for Cheney who’s currently on trial, defending himself against charges of perjury, obstruction of justice and lying to FBI agents who were investigating the leak of Plame’s identity to journalists.”