Last Monday night at London’s Cafe de Paris I attended one of Cedering Fox‘s WordTheatre gatherings — a literary salon-type deal in which a blend of modestly famous and very famous actors (West Wing star Richard Schiff and British actor Ian Hart were the headliners) stand in front of a mike and read short stories to 150 or 200 people, with those in attendance getting to feel slightly special as a result. 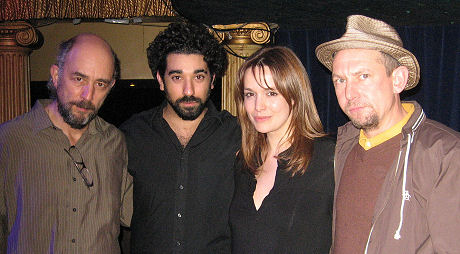 Actors are always best when savored live; they rarely get to show their range and strut their best stuff in movies. And because the stories are carefully chosen and the readings aren’t just “read” but performed with exceptional flair and expertise, a WordTheatre event — I’ve been to two — delivers the same kind of nutritious turn-on vibe that a first-rate play usually provides. Plus there are glasses of wines and trays of canapes (i.e., munchies that are somewhat lighter and crispier and less filling than hors d’oeuvres) passed around before and after the show.

WordTheatre presentations happen year-round in London (where three are yet to come in ’07), New York and Los Angeles. Last Monday’s show featured Lucy Brown (see below) and Ray Panthaki along with Schiff and Hart.

A big London supporter is Guardian contributor and fiction editor of Prospect magazine Alex Linklater, his hope being that WordTheatre will help revive general interest in the short story and particularly in the National Short Story Prize. In remarks before the Cafe de Paris show began, Linklater said that “some time in the 1980s something went wrong with our relationship with the story form. Up until then they were everywhere, ranging from Jackanory and Roald Dahl to Ian McEwan and Angela Carter. Then suddenly publishers and editors decided people didn’t like them.” 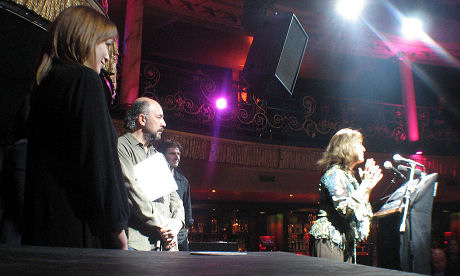