“They didn’t know what they had,” a guy said last night at the Zodiac premiere. “Big studios almost never get it [i.e., the value of any film they’re about to release]. Until it makes money. Then they’re delighted.” 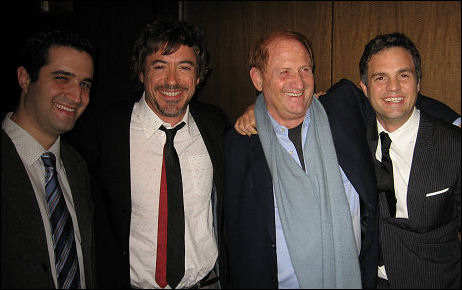 He was speaking of the Paramount execs who decided not to release Zodiac in late December of last year, a move that eliminated any chance of the film appearing on just about every ten-best list from the big-gun critics (which would have happened, no question) not to mention the potential winning of some Best Picture honors from critics groups as well as acting nominations for at least two of the three Zodiac leads — Robert Downey, Jr. and Mark Ruffalo.

(This is not to disrespect the work of costar Jake Gyllenhaal, who’s less overtly actorish in Zodiac and much more burrowed into the soil and milieu than he’s ever been — I think it’s his career best. The fact that he’s outmaneuvered by Ruffalo and Downey in terms of style, swagger and authority is nothing to feel badly about.)

Downey, Ruffalo, producers Mike Medavoy and Brad Fischer, costars Donal Logue (extremely slimmed down) and Philip Baker Hall, various other cast members and Paramount marketing chief Gerry Rich attended the premiere. It was a no-frills event — no food or booze afterwards. A large mob of paparazzi did their usual hoot-and-holler outside the big Paramount theatre (i.e., on the eastern side of the lot). The screening started almost a half-hour late.

The state-of-the-art digital projection and sound were awesome. Zodiac looked perfectly fine when I saw it projected on film at the smaller Sherry Lansing theatre on the Paramount lot two or three weeks ago, but I was stunned and mesmer- ized by how exquisite it looked last night. (I kept saying to myself, “This is per- fect…perfect.”) I don’t even know if Zodiac is being digitally projected in commer- cial theatres, but if it is, make a point of seeing it this way if at all possible. 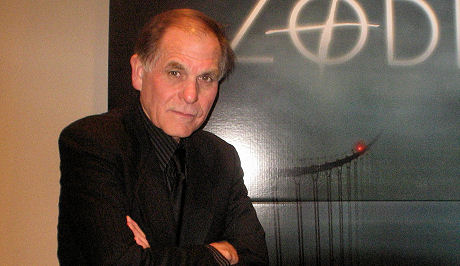 I spoke briefly to Robert Graysmith, the author of the two Zodiac books as well as the real-life guy Gyllenhaal plays in the film. He told me about the day he went to meet — stare at, confront — suspected Zodiac killer Arthur Leigh Allen, and how Allen later pulled alongside his parked car when he was in the driver’s seat — so close Graysmith couldn’t have opened his door if he tried — and just idled and eyeballed him, oozing malevolence.

I also spoke to Bryan Hartnell, a successful attorney who was stabbed several times in the back by the Zodiac killer at Lake Berryessa on 9.27.69. Unlike his then-girlfriend Cecelia Sheppard, who was also stabbed numerous times (not just in the back but in the chest and abdomen) and died the next day, Hartnell obviously recovered and is doing just fine. He said he wasn’t particularly trauma- tized or even upset by revisiting his horrific near-death — not last night anyway. Very cool, composed and matter-of-fact…”glad to be here!”