Reader Marc Gottleib reports that a fire alarm stopped all screenings tonight and forced an evacuation at Hollywood’s Arclight theatre. Gottleib was watching a DVD-launch screening of Payback: Straight Up, and about an hour into the film (right after Mel Gibson is saved from getting castrated on the hood of a car by Lucy Liu and her Asian thugs), the film suddenly stopped and the emergency lights came on. And the next thing we know, everyone was being herded out of the auditorium. 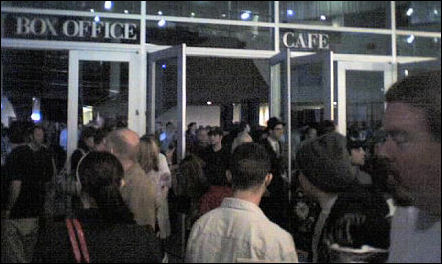 “It turned out that we weren’t the the only ones and the entire Arclight complex was being evacuated with lights out (except for emergency lighting). Alarm klaxons were blaring and strobe lights flickering, and waves of patrons from all the theatres were suddenly outside in the courtyard as firemen moved through the crowd carrying all manner of equipment.

“A half hour went by and there was an announcement that the place may be shut down for the night, but we were welcome to wait to see if the Fire Marshal would declare the theatre safe. Another ten minutes went by before we ended up leaving, and still everything remained dark. The staff looked completely dumbfounded. They did announce all ticket stubs from tonight would be honored for later showings.

“I guess I’ll have to wait for the DVD next week to see how Brian Helgeland‘s intended version of Donald Westlake‘s novel turns out, but for the first hour, the movie was really very good. An absolute marked improvement upon the flaccid Paramount hack job — in this version Ginson is a raging, nasty sonofabitch. He’s no Lee Marvin, but he held his own here.”