“The auteur theory, I’ve finally decided, can kiss my ass,” says Guardian columnist John Patterson. “I’m done with it. It bores me. I flee in great haste from the mere mention of its name. It’s a cult of personality. It’s a marketing scheme. It’s become a misleading umbrella-term falsely uniting a diverse body of collectively created work under a single name. 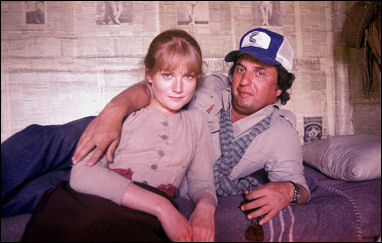 “And it just encourages the tacky, egomaniacal film-school cult of the writer-director as lone presiding genius. More and more I tend to find myself believing in what the writer Thomas Schatz called ‘the genius of the system.'”

Patterson is right in implying that if it hadn’t been for Andrew Sarris‘s The American Cinema, which popularized the French auteur theory after Sarris wrote his first seminal essay on the topic in ’62 or thereabouts, we might not have had the legend of Michael Cimino and therefore the debacle that was Heaven’s Gate.

Wait, I forgot: Heaven’s Gate has been elevated into semi-respectability (or is it full respectability?) by tireless Cimono pallies like F.X. Feeney and is now…what’s the party line?….a fascinating American pastoral piece that was judged too quickly and harshly when it first came out.

[Note: The Patterson essay was linked earlier today on Movie City News, which means that all linking rights from this point on are owned by David Poland. I am choosing to ignore this for reasons that presumably don’t need explaining.]