If you care about westerns or urban action movies, you care about the sound of gunfire. I love it when a filmmaker takes the time and effort to make the old blam-blam sound exactly right, or in some better-than-real-life way (like Michael Mann did with Tom Cruise‘s pistol shots in Collateral). And it always turns me off when gunfire sounds wrong. This hardly happens any more, but I was reminded last weekend as I watched John Sturges‘ The Magnificent Seven what really bad gunfire sounds like. 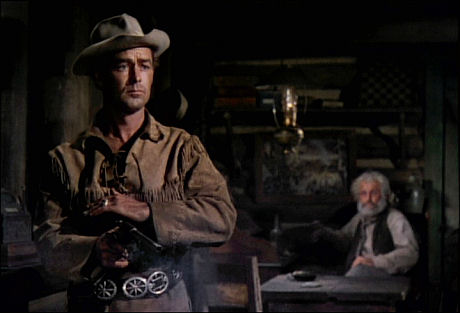 Then I remembered that I wrote about this very topic close to six years ago, so here ‘s the piece again. I’m figuring some of the present-tense readers weren’t around back then, so here, in honor of Nick Nolte‘s journalist character in I Love Trouble, is a Reel.com re-run.

“Good work has gone into MGM Home Video’s DVD of The Magnificent Seven,” I began. “The 1960 Western didn’t create a huge stir initially but has since become a kind of cult flick, particularly beloved by boomer critics and filmmakers who were kids when they first saw it.

“But the sound of the gunfire in this film is wrong. I would even say irritating. Every time an acto rin that film shoots a rifle or a handgun, we hear the exact same report — a three-syllable sound that phonetically translates as ‘guh-BACH-owhl.’ Most of you know this sound. You’ve heard it in a hundred other westerns (cheaper ones, usually) and ‘guh-BACH-owhl’ is its name.

“I’ve shot pistols and rifles and M-16s and machine guns, and none of them went ‘guh-BACH-owhl’ when I pulled the trigger. They usually go “Bauhlnt!” but shortly, succinctly. Another sound I’ve heard from live guns is “Puhng!”

“One of the least accurate-sounding gunfire recreations you’ll ever hear on a soundtrack is in George Stevens‘ Shane, although it’s absolutely one of the coolest. The guns in that film roar like cannons inside an echo chamber. Warren Beatty once said in a documentary about Stevens’ life (George Stevens: A Filmmaker’s Journey) that he tried to recreate this same sound for Bonnie and Clyde.

“Beatty understood how great the Shane guns sounded and cared enough to make the effort to reproduce them. Sturges never went that deep. There are about 145 ‘guh-BACH-owhl’ shots in The Magnificent Seven, and by the time you hear 40 or 50 it starts to get bothersome. I don’t mean to sound petty or obsessive, but when you’re doing a Western you have to get this stuff right.”