Why don’t these stories tell us what we want to know, and let us see what we want to see? Britain’s Daily Snack reported last night that Hugh Grant has been arrested for assault “after allegedly hurling a container of baked beans” at photographer Ian Whittaker yesterday morning (i.e., Tuesday) somewhere in west London. 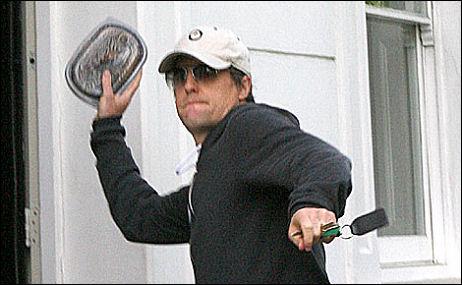 What I want to know is, did Grant hit Whittaker with the beans in the head or the chest or where? Did the take-away container splatter all over the place and cover Whittaker’s face in brownish-red sauce and gooey-drippy beans?

And where’s the photograph? Can you imagine being a photographer and covered with baked beans that were thrown by a big-name actor and not taking a photo of yourself? Not to have done so argues with the primal instinct that drives all photographers. If I’d been Whittaker I would have persuaded a passerby to take the shot. And yet it happened a day and a half ago and no photo. This suggests to me that there wasn’t much to see.

Whittaker seems to be a well-respected photographer, by the way.