It’s not signed, sealed and delivered, but I’m hearing that a deal for Warren Beatty to portray Richard Nixon in Ron Howard‘s Frost/Nixon is nearly compete, and they he’ll costar with Michael Sheen (The Queen) as Frost. A guy with some perspective on Beatty’s dealings says “naaah, that’s not gonna happen” so maybe not. And yet people close to the situation are saying it’s pretty much Beatty so let’s see how it pans out. 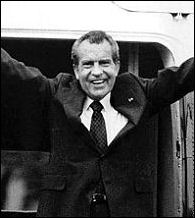 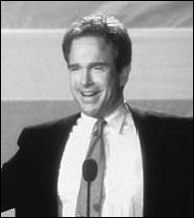 I’m told by another source that Howard offered the Nixon role to Beatty two months ago. This same source tells me that Oliver Stone was interested in Beatty playing the same U.S. President in Nixon before settling on Anthony Hopkins.

If the Beatty-Nixon-Howard things turns out to be true, this has to be one of the most bizarre casting calls I’ve ever heard of. Surreal almost. Beatty is not a chameleon-type actor. His Bugsy showed that he’s pretty good as a swaggering sociopath, but I really don’t see him getting under the skin of a conflicted and constipated hollow man who once described himself in a letter to his mother as “good dog Richard.”

Nixon was the antithesis of smooth and affable — capable of being “friendly” but burdened with a dark-cloud soul and physically ungraceful. Beatty’s lack of physical resemblance to Nixon can be mitigated to some extent with makeup and prosthetics, but Beatty has never distinguished himself as a voice impersonator, and his pipes are definitely higher-pitched than Nixon’s ever were. It just seems weird.

I guess the thinking is that Beatty is bigger box-office than Frank Langella, who currently playing Nixon in previews of Frost/Nixon on the B’way stage. I haven’t seen Langella in the role but he was praised to the heavens when he played Nixon on the London stage. I guess the thinking is that if Hopkins can play Nixon without looking the least bit like him, Beatty can do it for Ron Howard. I suspect that the reaction around town is going to be fairly negative and that Howard may have second thoughts.