An interesting piece by Deadline Hollywood Daily‘s Nikki Finke about how The Weinstein Co. flipped off the core audience for Grindhouse by refusing to book the Quentin Tarantino- Robert Rodriguez film in actual grindhouse cinemas like Portland’s Clinton Street Theatre. 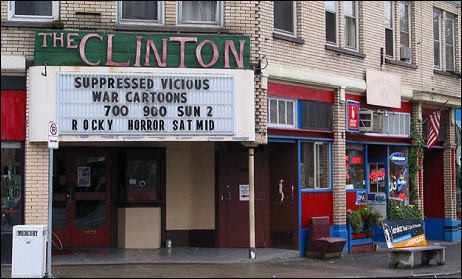 “I received some very interesting info this weekend from Seth Sonstein, the owner/programmer at the Clinton Street Theater, detailing how he tried in vain to convince The Weinstein Co. to allow his venue to play the pic,” Finke begins. “The Clinton is a unique single-screen indie art house considered a true Grindhouse in Portland, Oregon. (For instance, it just ran a film series that included original 35mm prints of Switchblade Sisters, Crazies and Spook Who Sat By The Door.)

“Looking at the email exchange, I can see that TWC’s branch sales manager Keir Gotcher kept giving The Clinton the run-around. “I wanted to give you some insight into Grindhouse being a flop,” Sonstein wrote [and explained]. “We begged The Weinstein Company for a print of this film. In the end they would not give us a print.

“Also, Dan Halsted runs the Grindhouse Film Festival out of The Hollywood Theater in Portland, and Weinstein would also not release a print to him. (Dan knows more about Grindhouse films then anyone in the country.) So I attest that the distribution was botched on this film.”

“To not just ignore a movie’s base, but actually rebuff it, makes no sense,” Finke concludes.