“Everyone says the country isn’t ready for a black president. I think that’s ridiculous. Is he going to lose Illinois? Is he going to lose New York or California because he’s black? No. And maybe he makes some inroads into other places, and maybe, for once, he could get young people to show up and vote.” — George Clooney talking about the ’08 presidential election prospects of Sen. Barack Obama, as conveyed in an over-and-done-with (i.e., four days old) L.A. Times piece by Tina Daunt. 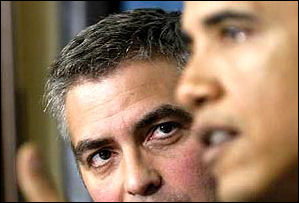 Clooney is right-on except for the part about Obama getting young people to “show up and vote.” More young people than usual showed up at the polls in November ’04 (they accounted for 17% of the electorate), but a much bigger percentage didn’t vote at all. Younger voters are usually more liberal and supportive of challengers and against the status quo, and therefore would have mainly voted for John Kerry.

They could have therefore denied Bush his re-election, but they didn’t. Too many of the 18-to-29 age group sat on their ass and became, as I put it the day after election, the “generation of shame.” As one MSNBC commentator remarked, “in a presidential election younger voters will always leave you at the altar.”