What are three darkest and most traumatic disasters of the past six years? 9.11, Katrina and the Asian tsunami, right? The last two were about awful floodings, drownings, hundreds of bodies, stench, misery on a massive scale…really horrific wrath-of-God stuff. And yet everyone’s ho-humming about the summer’s biggest (i.e,, the most grossly expensive) comedy, Evan Almighty (Universal, 6.22), being about God (Morgan Freeman) deciding to bring the absolute worst super Katrina-tsunami of all time down upon the world. 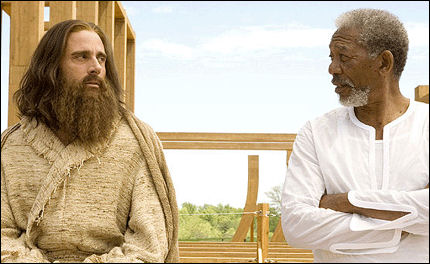 We all know that Universal isn’t going to drown everyone while trying to make us laugh, and that God, despite ordering Evan (Steve Carell) to build an ark big enough to hold all the animals, will reverse course at the finale and say something like, “Evan, you’ve kept your word and fulfilled your task…God is pleased with you….now go home to your family because I’ve changed my mind about bringing about the most ruthless act of mass murder in the history of the planet.”

But even with this cheap turnabout ending, doesn’t a film with all these echoes and intimations (i.e., about how homo sapiens has screwed the world up so badly that God has decided to wipe the slate clean and start all over again) at least make you crack a smile? I personally feel that that the threat of cataclysmic disaster involving the death of hundreds of millions is fucking hilarious.

On one level Evan Almighty is just another God comedy-slash-moral fable (a tradition that goes back Oh, God!) but it’s also arriving in the wake of the industry having been mightily impressed by those Passion of the Christ bucks and deciding to try and grab as much of that religious-right moolah as it can. It’s also following in the backwash of The Reaping, another slick pander-job about God’s Biblical wrath. On top of which Tom Shadyac, the director of Evan Almighty, is said to be a guy who takes spiritual and religious matters fairly seriously. 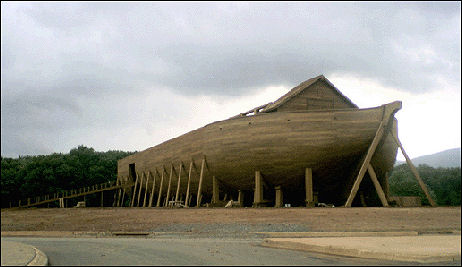 I don’t know if one is connected to the other or what the overall quilt will look like, but throw this all together and add the certainty of all that mirth-smothering CGI, and the Evan Almighty laughs are going to be mostly about shtick and little else. The bits may be funny, but undercurrent is gloomy as hell.

I can see people who love the idea of checking their brains at the door crowd having a rollicking good time with Evan, but all you have to do is think for 20 or 25 seconds about the content and the sub-currents, and the reasons that went into the greenlighting of this thing apart from an interest in making money, and honestly… what’s to laugh at?

What is Evan Almighty deep down? Basically a religious metaphor concept about a relatively shallow and opportunistic man being touched by a cosmic spirit, and the difficulty he goes through in order to express his state of illumination and be at one with his vision. As such, it may seem to some like a companion piece to what Richard Dreyfuss went through in Close Encounters of the Third Kind. Except this time there can’t be a payoff climax (i.e., the world-flood equivalent of aliens landing their mother ship next to Devil’s Tower) because Universal doesn’t want everyone dead. 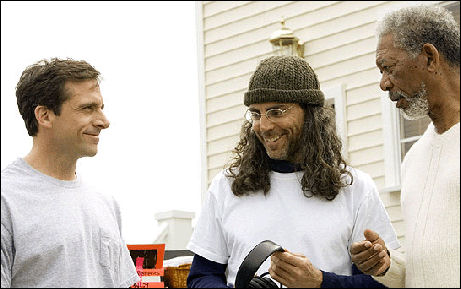 So Freeman’s change-of-heart scene (or whatever it is that Shadyac and his writers have dreamt up that will prevent the deaths of hundreds of millions) is going to be the equivalent, more or less. of Francois Truffaut‘s Lacombe character saying to Dreyfuss, “I am sorry, Mr. Neary, but the aliens have turned around and flown home.”

The writers of Evan Almighty are Steve Koren, Mark O’Keefe and Steve Oedekerk, based on a story by Joel Cohen and Alec Sokolow.