A movie called Everything’s Gone Green would naturally be presumed to be about conservation and global warming. It’s actually a wise, intelligent and mildly amusing little film (emphasis on the “mildly”) about GenX mores, values and lifestyles in Vancouver, British Columbia. But it’s a little too amiable and mild-mannered, even though it obviously came from the heads of some very bright, sophisticated and spiritually-centered people — first-time director Paul Fox and screenwriter Douglas Coupland (the author of “Generation X”) in particular. 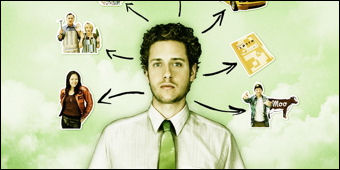 The problem is that dramatically Everything’s Gone Green never gets out of second gear. That’s not a terrible thing to say about a film. At least I’m saying that the motor is running and it’s in some kind of gear and not just idling in neutral. But you know what driving in second gear is like. You’re moving along and that’s cool, but there’s a voice saying “c’mon, c’mon….let’s get going.”

I didn’t feel bored because the outdoor Vancouver locations are fascinating, the dialogue is smart and witty and the actors don’t try to “act” or overdo it — they’re appropriately low-key and unforced. But the movie is so laid back that it over- relaxed me, and before I knew it my eyelids had begun to droop and I wound up taking a short nap. But this is one of those films that are okay for some fast shuteye. I’m not trying to be a smart-ass by saying this. I’m just observing that when I woke up, not that much had happened and it wasn’t hard to figure what I’d missed so…you know, cool. No harm done.

Everything’s Gone Green is about a bright, vaguely bored young guy named Ryan (Paulo Costanzo) who gets canned from his job on the same day that his girlfriend (Katharine Isabelle) gives him the boot and his frazzled, ’60s generation parents have a fit…forget it, it’s not worth bringing up.

Ryan, who has friendly dead-fish eyes and the requisite disaffected-young-guy whisker thing going on and light brown hair that is Brillo-pad thick, then lucks into a gig writing about winners for the state lottery. He happens to meet a sparkly-eyed set-dresser (Steph Song) who finds him attractive, but he also runs into her ex-boyfriend, who’s a bit of a slime. He persuades Ryan to take part in a scheme in which he sells the names and numbers of lottery winners to the Japanese mafia, who offer to buy the wining ticket for a bigger bulk sum than the winners would otherwise receive. (Or something like that.) Not an illegal enterprise, exactly, but there’s a bit of an ick factor.

Anyway, Ryan does pretty well by the scam — he gets to buy a brand-new yellow Mustang and some new threads — but Song’s character doesn’t like what he’s up to and refuses to be his girlfriend because of this. I lost interest in this point. Women are always the ones to say to husbands, boyfriends and would-be boyfriends, “If you don’t stop your involvement in this morally shady enterprise, I’ll leave you” or “I’ll stop fucking you” or, if the sex hasn’t kicked in yet, “I won’t consider fucking you.” Al I know is, when women say these things to guys in movies and plays, I say to myself, “Here we go again…”

My telepathic advice to Ryan was as follows: “Get out of the scam because you’re going to eventually get popped or shamed in some way, even if it’s not strictly illegal, and also because you’ll be losing a hot girl if you don’t. But the girl, on the other hand, is going to guilt-trip you no matter what the issue is in the future so you might want to get down with someone who’s a little more comme ci comme ca.”