Famous people are going to be poked and badgered from time to time about their sexual tastes and proclivities (i.e., by gay media types if they happen to be gay), but it’s their own damn business and if they want to keep it private they’re damn well entitled and should be left alone. I say this having read on Radar Online that Out magazine’s May issue (on sale 4.17) is raising a rude curtain on Anderson Cooper and Jodie Foster, even if there’s not much of a debate about where these two are at. 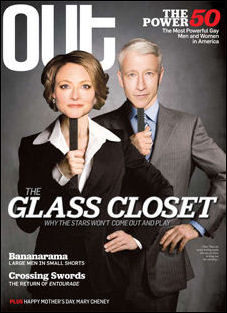 Would it be a healthier world all around if no one made the slightest attempt to mask their sexuality because doing so would be needless and pointless? Of course, but if a person decides that his/her career will work out better if they keep their cards to their chest, they should be allowed to play it that way.

This is off-topic, but the same goes for those execs in the film industry who’ve had “asshole interventions” — i.e., family and friends sitting them down and telling them they need to make some behavioral adjustments for the general betterment. (A producer of a film I saw recently allegedly went through one of these about eight or nine years ago.) Would you want to be on the cover of some magazine if you (or your wife/husband) had undergone group therapy along these lines? Would you want it known that your personality problems had become so critical that family and friends had to step in and try and fix things?

This is a good reader-response topic. What persons working in or adjacent to the film industry right now could be evaluated to be most in need of an asshole intervention? I know, I know….I’m a candidate, right? But who else? There must be dozens.