Grindhouse opens today so I’m rehashing four basic points I covered in my 3.24 review: (a) a sleazy double-feature in the style of late-’60s exploitation flicks, it samples and comments upon a long-dead genre without really “being” anything itself except for a slick showcase of hip-guy-filmmaker attitudes; (b) still, for a film that runs just over three hours (i.e., 184 minutes) it’s a live-wire, better-than-okay ride and well worth the $10 bucks plus parking. 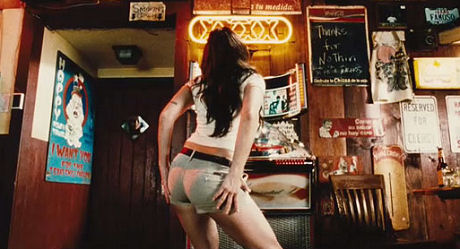 The problem (c) is that it starts with a semi-dud (Robert Rodriguez‘s Planet Terror, a tired, gloppy and mostly groan-worthy zombie movie except for Rose McGowan‘s pistol-hot action scenes with her prosthetic machine-gun leg) that you have to sit through in order to get to the really good one, which is Quentin Tarantino‘s Death Proof; and (d) amped with a great Kurt Russell performance (half Hickey in The Iceman Cometh, half hot-rod death demon), Death Proof is a sexy, sassy hot-chick flick boasting one of the most exciting, non-CG car-chase sequences in cinema history.