It’s an old tune about how the Harry Potter movies have stopped mattering. The zeitgeist-connectivity factor peaked three years ago with Alfonso Cuaron‘s Harry Potter and the Prisoner of Azkaban. Tens of millions have been programmed to pay to see them, of course (picture those school kids marching into that gothic Orwellian factory in Alan Parker‘s Pink Floyd: The Wall), and you can bet this will happen when David Yates‘ Harry Potter and the Order of the Phoenix (Warner Bros., 7.13) arrives. 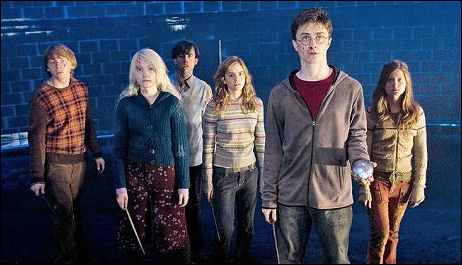 The trailer looks exciting in the same old flash-cut, ooh-wow way that all trailers for all the expensive CG movies tend to be, but it seems to be selling the same old shite with a slight budding-hormone twist. This time there’s a conventional bald ogre baddie without a nose, Imelda Staunton as a new Hogwarts bureaucrat baddie, and Katie Leung as Cho Chang, Harry’s (Daniel Radcliffe‘s) new love interest.

I wouldn’t go to a free screening of this film with a knife at my back. I wouldn’t watch it if I was on a 15-hour plane trip top Thailand and dying of boredom. Okay, maybe if I’d watch it on the plane if it was being shown in a high-def format, but certainly not on one of those cheap-ass, back-of-the-seat video screens.

Emma Watson (i.e., Hermione) has been my favorite since the series began. She’s now 17 and posing on magazine covers, etc., so why not a little romantic subplot for her also? I wonder why she’s so short though. (Radcliffe is Dustin Hoffman‘s size and he towers over her.) Did they cast these kids based on their genetic predispositions to not grow to anything close to adult-sized height? No matter — Watson’s got the charisma.