A witness to the mayhem at Virginia Tech yesterday was hiding with others in a room behind some kind of locked or barricaded door, according to one news story I read, and he said that the gunman tried to push his way in and couldn’t, and (according to one news report) that he then tried to shoot his way in — two or three rounds were fired at the door handle or lock mechanism — but couldn’t. 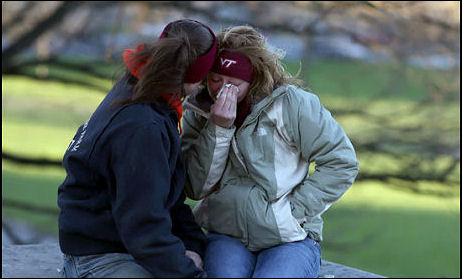 That, I said to myself, is something that screenwriters of Hollywood action thrillers and horror films have never depicted, and in fact have chosen never to depict. The psychopathic Hollywood killer is always omnipotent, and can never be stopped from killing his victims by a locked or barricaded door…not ever. He always knows where the would-be victim is hiding, he’s always a step or two ahead of the game, and he’s always waiting for the would-be victim in any hiding place and ready to go “boo.”

This is what is ineffective — inept — about too many Hollywood thrillers. They don’t respect reality and the fact that sometimes a simple locked door saves your life. Not very exciting, perhaps, but do you think the people who were shuddering and praying to God behind that locked door yesterday were bored as Cho Seung-Hui tried to shoot his way in?