Being a graduate of Wilton High School, I ran a summation on 3.25.07 of a N.Y. Times story about several teenaged students who were outraged that their WHS principal, Timothy H. Canty, had cancelled an April performance of a play they were preparing on the Iraq War called “Voices in Conflict.” Canty told Times reporter Allison Leigh Cowan that he kibboshed the play over “questions of political balance and context.” Translation: conservative voices in Wilton wanted it suppressed. 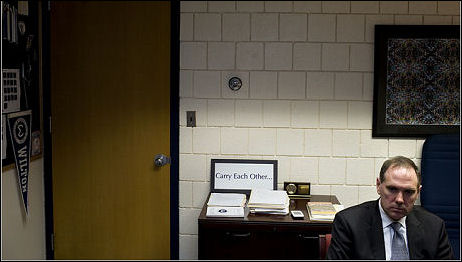 Wilton High School principal Timothy J. Canty, seemingly dejected and despondent in the wake of news that “Voices in Conflict” will be staged at New York’s Public Theatre.

Now, two and a half weeks later, the students and their play have prevailed and Canty, with some assistance from the N.Y. Times photo editors, is looking like a putz.

A N.Y. Times story published today says that “Voices in Conflict” will be performed in June at Manhattan’s Public Theater and also at the Culture Project, which is “known for staging politically provocative work.” A third show at a Connecticut theater is also being discussed.

“We are so honored and thrilled…there’s no words to describe how excited we are,” Bonnie Dickinson, the teacher whose advanced theater class at Wilton High School put the play together, told the Times yesterday.

The story says that the students “were presented with a Courage in Theater award last month for their ‘non-performance’ from Music Theater International, a New York agency that licenses many high school productions. And last week, theater greats including Edward Albee, Christopher Durang, John Weidman, Marsha Norman, Doug Wright, John Guare and John Patrick Shanley, under the auspices of the Dramatists Guild of America, joined the National Coalition Against Censorship in calling for the [Wilton] school district to allow the play to go on.”

The reason I said that the N.Y. Times photo editor has contributed to the diminishment of Canty’s reputation is obvious when you consider the above photo. It’s clearly an impressionistic portrayal of Canty as a sour and bitter man of small stature and dejected spirit. Its appearance next to Cowan’s story obviously conveys an editorial view on the newspaper’s part. Any liberal, free-thinking person would agree with this view, of course — Canty was certainly the bad guy in this story. The photo is actually comical — I laughed out loud when I first saw it this morning.