One question about Stu Van Airsdale‘s video excerpt from last night’s Lincolm Center Diane Keaton tribute, at which Woody Allen, Meryl Streep, Steve Martin, Martin Short and Candice Bergen spoke and praised and shared set stories. The question is, why show a video of Martin’s somewhat funny, somewhat inane banjo performance when we could have just as easily watched and listened to Allen deliver his remarks, which seemed to have been the hit of the evening? What’s with the damn banjo? 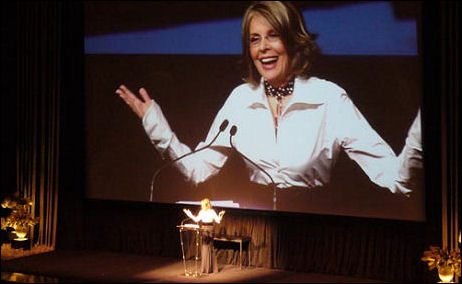 “I’m sure you’ve all, at one time or another, heard the term ‘passive-aggressive,’ ” Allen began, drawing the longest laugh of the night with his first utterance. “I only mention this because every film I did with Keaton, I always wrote all the good jokes and all the good stuff and all the good scenes for me. When the picture came out, she was the funny one…she got all the reviews. So, you know, it’s infuriating.

“She called and asked if I would say some nice things [for thsi event], and I asked, ‘What the hell do you want to be honored for?’ Because I could never see the point of being honored; you sit there and there’s adulatory things…you get bathed in obsequious adulation and all that garbage. But she liked that idea, and then I heard the desperation in her voice. So I said okay, Keaton is…’ Allen paused. ‘Punctual? And she’s… thrifty? What else can I say about her?'”