Defend your own fort and make your own judgments, but Todd McCarthy‘s review of Spider-Man 3 — “the three main characters and the film itself stuck in a rut…a dip in quality and enjoyment [from Part 2]” — strikes me as a bit more straight-from-the-shoulder than Michael Rechtstaffen‘s review in the Hollywood Reporter. 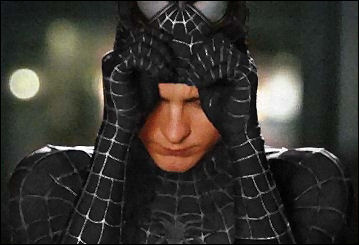 Am I saying this because McCarthy is saying what I’ve been suspecting would be the case all along? Yes. It’s no secret that I’m predisposed to trash Spider-Man 3. (And I don’t like living in this place at all, let me tell you. I wish there were reasons to expect something better. Harboring prejudicial feelings feels like you’ve got a cold in your chest.) But you don’t need to look into Professor Marvel’s crystal ball to formulate a pretty good idea of what’s coming.

McCarthy is a widely respected guy who, by my standards, gets it right fairly often. (His biggest boner was dissing The Big Lebowski when it had a special Sundance screening way back when.) His review and reviews like it will mean absolutely nothing to the fanboy hordes, of course, but at least they (as well as others of discerning taste) now have something to give them pause.

“The three main recurring characters get stuck in a rut and the same can be said of the film itself in Spider-Man 3,” he begins. “After the significant improvement of the second installment over the first, new entry reps a roughly equivalent dip in quality and enjoyment, with Spidey now giving off the faint odor of running on fumes.

“This devaluation shouldn’t hurt at the box office, at least at first, as the vast majority of the fans who turned the first two into $822 million and $784 million worldwide grossers, respectively, will cram multiplexes around the globe to see the first blockbuster of the summer.

“A sense of strain envelops the proceedings this time around. One can feel the effort required to suit up one more time, come up with fresh variations on a winning formula and inject urgency into a format that basically needs to be repeated and, due to audience expectations, can’t be toyed with or deepened very much.”