In 1997, a guy named Michael Regalia bought a 1963 Ferrari Luosso that Steve McQueen used as an “everyday run-around car,” and spent 4,000 hours restoring it to its original condition. Christie’s is auctioning the car, which is expected be bought for at least $750,000. And Newsweek and other outlets (mine included) are helping Regalia and Christie’s in this effort. 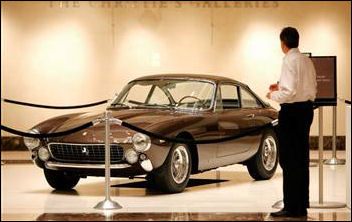 Everybody’s pitching in, you see, because McQueen is a mythical figure of ’60s machismo and because driving this car around will bestow an aura of instant legendary cool upon the purchaser. We’re talking major babe magnet here. The buyer, who will almost certainly be some guy in his 50s or 60s, will of course be making a solid investment, but will also be shelling out close to a million bucks in order to get laid.