Personal insult labels are fairly standardized the world over. One insult adjective, one insult noun. The disser focuses on a trait that he/she considers unattractive on some level (be it physical or character- based) and then attaches it to a noun that carries a strong whiff of denigration and devaluation. 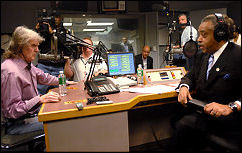 I remember someone at Spy magazine referring to Donald Trump back in the mid ’80s as a “thick-fingered vulgarian” — now, that’s insulting for a big-money guy looking to be respected by the big-city elites. But that was then and this is now. Everyone is getting trashed these days. I get hit with insult bombs left and right every day. We’re living in a fairly hostile, say-anything, blow-it-out-your-ass culture. Especially online.

In such a climate, talkshow host Don Imus referring to a team of black female basketball players from Rutgers University as “nappy headed ho’s” sounds offensive, yes — I’m sure Imus hurt the feelings of the athletes in question — but not outrageously so. It’s obviously malicious and insensitive to denigrate people in this fashion (or any fashion), but everyone is dumping on everyone else these days — why single out Imus? It’s a shitstorm out there.

Break the offense down and it’s not as bad as it sounds. (From a sociopathic, culturally insensitive viewpoint, that is.) To call a young African-American woman a “ho” has been completely routine in hip-hop circles since the mid ’90s, and every- one has been appropriating this slang for their own purposes since. Obviously, “nappy-headed” is a perjorative term, but it merely refers to the appearance of an African American woman who hasn’t had her hair straightened. It’s basically an economic putdown, the notion being that “nappy-headed” types can’t afford the sort of swanky hair stylist who could give them Beyonce hair.

It’s unkind to throw these two terms together, sure, but is it so over-the-top mean that Al Sharpton is justified in saying that Imus should be canned? It seems disproportionate. The N.Y. Daily News is reporting today that “Imus’ reign as the cantankerous prince of political radio was in peril after CBS Radio ordered his radio show suspended for two weeks starting Monday — and MSNBC also put the show’s simulcast on ice.”