Anyone who saw and loved Sandra Nettlebeck‘s Mostly Martha when it opened five years ago needs to click on the trailer for No Reservations (Warner Bros., 7.27), the Scott Hicks-directed remake with Catherine Zeta Jones and Aaron Eckhart playing the Martina Gedeck and Serge Castellito roles. It looks like a spirited romantic souffle, but it seems exactly (and I mean exactly) like the German movie, only slicker and cuter with a power-pop girly song on the soundtrack. 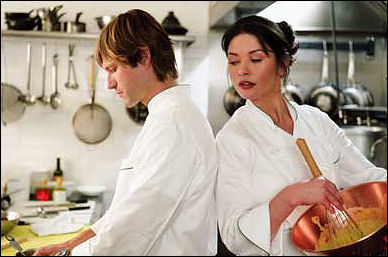 There’s one toxic line in the trailer, I regret to say. Jones, playing a sophisticated chef coping with heavy stress, says to costar Bob Balaban, “I wish there was a cookbook for life,” and he answers, “It’s the recipes that you create yourself that are the best.” (I flinched when I heard that; I may have also moaned slightly.) I know that I haven’t trusted Hicks in a long time. His last good film was Shine, and that was 11 years ago. Since then he’s made Snow Falling on Cedars (’99) and Hearts in Atlantis (’01), and they both blew.

No Reservations has been a long time coming with a lot of potholes and false starts. I’ve run this history before, but here it is anyway….

A little more than four years ago Variety’s Michael Fleming reported that director Lawrence Kasdan (Grand Canyon, The Big Chill, et. al.) was starting work (along with screenwriter Terri Minsky) on a U.S. remake of Mostly Martha for Castle Rock. There was moderate excitement about this since pretty much everyone with any taste was fairly taken with the ’01 German-made original.

I ran a rave in June 2002 about Martha, calling it “a culinary Kramer vs. Kramer” about a female Hamburg chef (Gedeck) with selfish tendencies having to take care of her recently deceased sister’s young daughter. I also called it “the most succulent, sensually appetizing, food-trip movie since Big Night or even Babette’s Feast.” 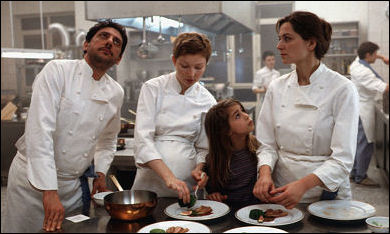 But Kasdan and Minsky, who wanted to set their film is some foodie city like New Orleans or San Francisco, ran into difficulty (I don’t know what kind) and their movie never happened.

In May ’04, a moderately painful, obviously Martha-inspired confection called Raising Helen, directed by Garry Marshall and starring Kate Hudson and John Corbett, was released by Disney and wound up earning just under $40 million domestically. It had the same set-up (sister dies in car crash, selfish single professional woman suddenly has to take care of her kids, etc.) although Hudson’s Helen wasn’t a chef — she worked at a modelling agency.

And then along came No Reservations, which is a resuscitation of the Castle Rock-Kasdan project. And again it’s about a selfishly-inclined lead character (now back to being a chef) taking care of her diseased sister’s young daughter (Abigail Breslin). The script is by Carol Fuchs, and the chef boyfriend is being played by Eckhart.