True story: I was sitting earlier today in the fairly famous Caffe Trieste, an espresso-cappucino joint on the border between North Beach and Telegraph Hill, when who walks in but Owen Wilson and Kate Hudson. I’ve written once or twice about how Owen and I used to talk with some degree of relaxation and trust in the mid to late ’90s and how he stopped picking up the phone when he got big, but that was six or seven years ago. Move on, shake it off, be here now. 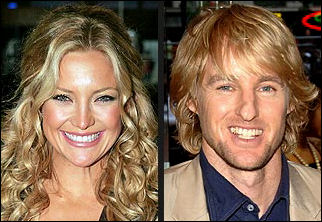 So I went over and poked him in the arm. Owen turned and lit up — he has a smile that really beams — and said, “Heyyyy!….howya been?…whaddaya doin’?” I smiled and muttered the same “yeah, yeah”-type stuff and gave him the rundown — San Francisco Film Festival for three more days, Cannes in mid-May, Jett joining me, blah, blah. I didn’t ask him for any recent news on his end. I’m fairly up to speed on his comings and goings.

Owen introduced me to Kate. “Hey,” I said, shaking her hand and keeping my smile in check. “Friend of Cameron’s.” (Well, sort of. Crowe has treated me like a friend, at least, and I’ve tried to reciprocate without being a journalistic kiss-ass.) Owen said that he and Kate had just been to the famed City Lights bookstore and were told that “Wes and Luke had [recently] been there also.”

I did my usual chickenshit thing when I meet an actor I know or like personally, which is to not be the journalist and pump him/her with questions. (I don’t even think about taking a picture.) So I didn’t bring up my feelings about The Darjeeling Express script or mention that I’d just re-watched The Big Bounce and liked it a bit more this time, or that I was curious to know how a script he’s been co-writing with Mike Binder (who lives close to Owen’s place) is coming along.

I did, however, mention that I saw The Wendell Baker Story, which ThinkFilm is bringing out on 5.18.07, “about two years ago.” Owen’s brother Andrew, who co-directed with Luke Wilson, showed it to me in a cutting room in the spring of ’05. 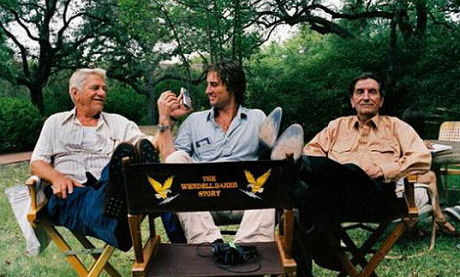 I told him I liked The Wendell Baker Story a whole lot except for the ending (I feel it’s a little too upbeat), and that maybe we could do a sit-down interview of some kind during their press junket interviews in New York on May 8th. Owen side- stepped the slight criticism and said “there’s a lot of good stuff” in the film, and he’s right. “It’s got that understated Wilson-y vibe,” I said. “That flip, ironic, dry humor thing.” An HE reader has described it as a “Rancho Deluxe quality.”

I’ll just say this and maybe the Wilson brothers will do something about it. The film’s once-operational website, www.wendellbaker.com, is no longer running and the ThinkFilm site doesn’t point the reader to some other Wendell Baker site. (Leading me to conclude that probably there isn’t one.) This shouldn’t be, and it’s easy to fix.

April 27, 2007by Jeffrey Wells14 Comments
« Previous post
Chivo shooting for the Coens
Next post »
Queen Latifah “All of Me”