Gere is too old

L.A. Times guy Paul Cullum has struck again with a Richard Gere interview piece about his portrayal of legendary con man Clifford Irving in Lasse Hallstrom’s The Hoax. Gere is pretty good in the film — it’s one of his high-wire, high-energy performances, playing another great pretender — but there’s one small thing wrong that turns into a big thing the more you think about it, and it’s the kind of thing Cullum would never mention in one of his kiss-ass profiles. 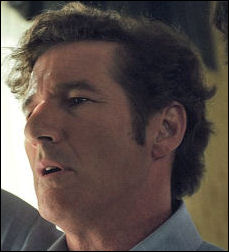 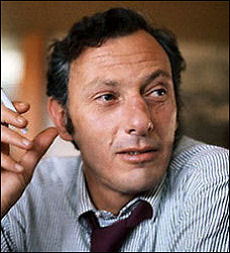 (l.) Richard Gere as Clifford Irving in The Hoax; Irving himself sometime in the early ’70s

Irving was born in November 1930, and was 40 and 41 years old when the Howard Hughes fake-autobiography scandal happened in 1971 and early ’72. Gere looks fine for his age, but he doesn’t look too much younger than 57, even with dyed brown hair. And Irving was a handsome, young-looking guy back then (i.e., like someone in mid to late 30s), so Gere is facing even more of an uphill situation.

Plus you need the elan of youth to play a man who’s so arrogant that he decides to tell one of the biggest whoppers of all time to everyone on the planet. A guy like that in a movie has to look, at the very oldest, about 40. When you’re 40 years old you’re still close enough to your 30s to have hung onto that cocky attitude you once had…that “I’m so fucking cute I can get away with anything” mentality. An audience can roll with a 40 year-old doing this (especially one who looks a tiny bit younger), but the sight of a guy in his mid ’50s shamelessly lying through his teeth is tawdry and undignified. You’re supposed to know better after you’ve passed the big five-oh.