Tony by the lake

“The main difference between The Sopranos and its spawn wasn’t prurience, it was ambition. Most shows overreach or ‘jump the shark’ when they pile on too much melodrama and too many dead bodies. On The Sopranos, it was the opposite: The show lost its way when it put murders and mischief aside and weighed itself down in ponderous character sketches and too many Bergmanesque dream sequences. 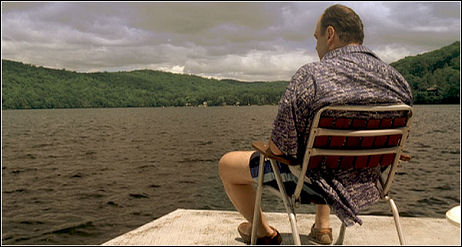 “Those flights of fancy were not surprising given how often the series was hailed as Shakespearian or Dickensian. Norman Mailer recently called The Sopranos the closest thing to the Great American Novel in today’s culture.” — from a piece by N.Y. Times columnist Alessandra Stanley called “This Thing of Ours, It’s Over,” in the Sunday (4.8) edition.