Martin Scorsese will handle three tasks as the Cannes Film Festival next month — giving the festival’s Cinema Lesson, handing out the Camera d’Or for Best First Film and officially launching his World Cinema Foundation, but there’s a fourth task he could be doing, and it would make sense if he did. He could be showing his Rolling Stones/”Bigger Bang” concert tour documentary that he began shooting last October (possibly to be called Shine a LIght), and which Paramount Pictures will release later this year. 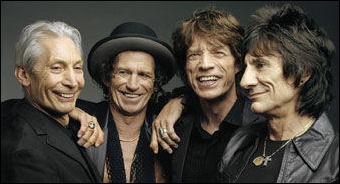 Of course, the concert doc (which the IMDB says was shot in a letterbox 2.35 to 1 aspect ratio…cool) may be not ready to show at Cannes, and it might turn up at September’s Toronto Film Festival instead (where Scorsese’s last musical- legend doc, Bob Dylan: No Direction Home, had its big debut). A Hollywood Reporter /Reuters story by Stuart Kemp that ran in early February said that Scorsese “is in post-production, working with a team of editors to assemble the film, which also will feature historical and current behind-the-scenes footage and interviews.”

I’m mentioning this Stones-doc possibility only because I’ve agreed with a 2.16.07 prediction by Toronto Star critic Peter Howell that it would show up on the Croisette, and because I reiterated that feeling in a 3.18.07 HE post, and because a couple of people told me afterwards that Scorsese “almost never shows his films at film festivals” or shows up to tout them.

I called two or three people at Paramount this morning to get an idea of what’s going on and nothing came of it. If it was happening they would have to keep mum anyway until the official 4.19 announcement of the Cannes entries.